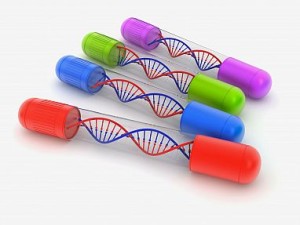 An international research team identified 42 new areas in the human genome associated with rheumatoid arthritis—and found that many are already the targets of drugs approved for other conditions. The findings hint at new treatment approaches for the disease.

Rheumatoid arthritis is a chronic inflammatory disorder that can cause pain, swelling, stiffness, and loss of function in joints throughout the body. It’s an autoimmune disease, in which the immune system mistakenly attacks the body’s own tissue, such as the membranes that line the joints. It can also affect other parts of the body besides the joints.

The causes of rheumatoid arthritis aren’t completely known. Environmental factors—such as cigarette smoking, diet, and stress—may play a role in triggering the disease. Genetic factors are also thought to play a role. Several genes involved in the immune system have been associated with a tendency to develop rheumatoid arthritis.

An international team of researchers, led by Drs. Robert Plenge, formerly of Harvard Medical School, and Yukinori Okada from RIKEN Center for Integrative Medical Sciences in Japan, conducted a genome-wide association study (GWAS). This type of analysis involves scanning genetic regions in search of tiny variations that appear more often in people who have a particular condition than in those who don't.

Scientists from 70 institutions worldwide were involved in the study, which was funded in part by NIH's National Institute of Arthritis and Musculoskeletal and Skin Diseases (NIAMS) and National Institute of General Medical Sciences (NIGMS). Results appeared online in Nature on December 25, 2013.

Using bioinformatics methods, the scientists identified 98 candidate genes in these areas that might potentially contribute to the onset of rheumatoid arthritis. Further analysis showed a significant overlap among some of the gene regions and genes associated with other conditions, including human primary immunodeficiency and blood cancers.

“By leveraging human genetic data, we were able to shed light on genes and pathways that contribute to the onset of rheumatoid arthritis. In the future, this approach could be applied to a variety of other complex diseases to discover new pathways and biological insights for drug discovery,” Plenge says.