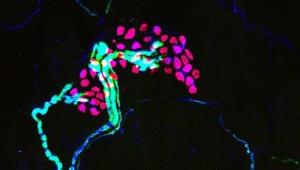 Merkel cells (pink) and nerve cells (blue) beneath the surface of the skin work together to create our ability to feel fine details and textures.
Credit Kara Marshall/Lumpkin lab, Columbia University Medical Center
Follow this link for the full story:
Discriminating Touch

Two research teams revealed how cells in skin feel fine detail and texture. The findings may help scientists understand how aging and certain diseases can reduce our ability to sense touch. They could also lead to new approaches to restore the sense of touch.

The molecular mechanisms of touch mechanotransduction (how cells sense mechanical forces and send nerve signals to the brain) are poorly understood. Merkel cells are known to be essential in sensing light touch. These cells are concentrated in our fingertips and lips, and also around the whiskers and in the hairy skin of many mammals. Merkel cell clusters and associated nerve fibers are organized into specialized crescent-shaped structures called touch domes. The precise roles of these cells has been unknown.

Two research groups reported insights into touch mechanotransduction in papers published online in Nature on April 6, 2014. One group was led by Dr. Ellen Lumpkin of Columbia University Medical Center. The other was headed by Dr. Ardem Patapoutian, a Howard Hughes Medical Institute Investigator at the Scripps Research Institute. The teams were funded in part by NIH’s National Institute of Arthritis and Musculoskeletal and Skin Diseases (NIAMS), National Institute of Dental and Craniofacial Research (NIDCR), and several other NIH components.

Both teams isolated Merkel cells from mice and found that they generated electrical currents upon being touched. Merkel cells also showed touch-evoked increases in calcium ions, suggesting that calcium channels are involved in the cells’ response to touch.

To explore Merkel cell function in intact skin, Lumpkin’s team used an approach called optogenetics. The scientists genetically engineered mice to produce light-sensitive proteins in Merkel cells, allowing the cells to sense light as well as touch. When these cells were exposed to either touch or light via optical fibers, they activated touch dome nerve firing. When the researchers interfered with the Merkel cells’ electrical signals, however, the response to touch was reduced tenfold.

Touch domes in mice genetically engineered to completely lack Merkel cells still responded to touch. However, nerve firing was stunted compared with that of normal touch domes. These findings show that Merkel cells and their associated nerves work together, with each responsible for different aspects of touch perception.

Patapoutian’s team focused on Piezo2, a mechanically activated ion channel found in sensory neurons. By marking Piezo2 with a fluorescent protein, the researchers were able to show that the ion channel was specifically expressed in Merkel cells.

To explore the role of Piezo2, the scientists genetically engineered mice to lack Piezo2 in their skin cells. The mice developed normally, and their skin appeared normal. But when the researchers isolated Merkel cells and gently touched them with blunt glass probes, none of the cells from Piezo2-deficient mice generated currents. Merkel cells from control mice, in contrast, responded well to touch. The teams confirmed that nerve fibers from touch domes in Piezo2-deficient mice had reduced firing responses to touch, similar to mice that completely lack Merkel cells.

Patapoutian’s team next performed a variety of behavioral tests to see how sensitive the animals were to touch. For most tests, mice lacking Piezo2 behaved similarly to control mice. But in one test that used fine filaments to apply varying degrees of pressure, Piezo2-deficient mice were significantly less likely than control mice to withdraw their paws at low forces. At higher forces, paw-withdrawing responses were similar.

Taken together, these findings show that Piezo2 is required for Merkel cell mechanotransduction. They also show that Merkel cells and adjacent nerves act together as mechanosensors. This 2-mechanoreceptor system allows for a sophisticated tuning mechanism.

“These experiments are the first direct proof that Merkel cells can encode touch into neural signals that transmit information to the brain about the objects in the world around us,” Lumpkin says. “The new findings should open up the field of skin biology and reveal how sensations are initiated.”

“Touch and pain are very closely related,” Patapoutian adds, “and thus the characterization of these mechanisms of touch should help us to understand pain better too.”