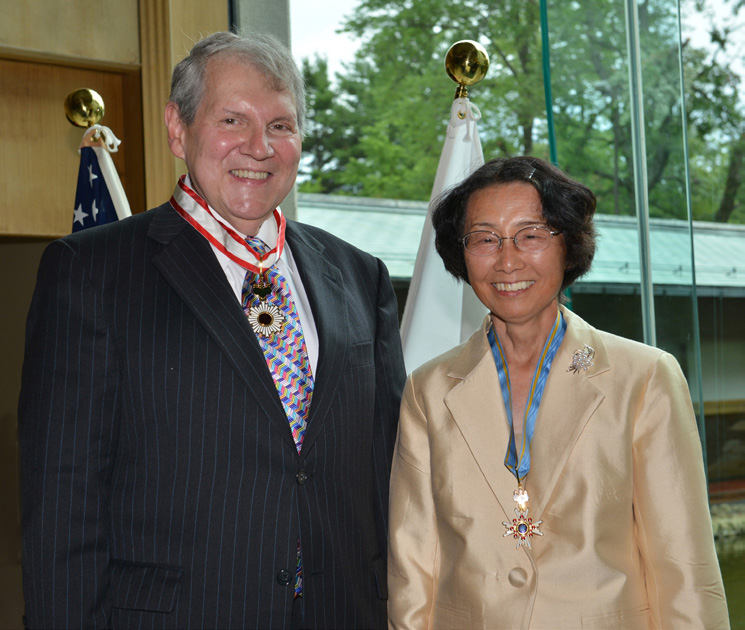 Two NIH scientists were recognized recently for their work fostering scientific collaboration and information exchange between the United States and Japan. The ceremony took place in Washington, D.C., at the residence of the Japanese ambassador to the U.S., Ichiro Fujisaki.

NIAMS director Dr. Stephen Katz was honored with the Order of the Rising Sun, Gold Rays with Neck Ribbon, for his contributions to “the education of Japanese dermatologists and to the development and internationalization of dermatological research in Japan.”

Also honored was Dr. Keiko Ozato, chief of NICHD’s section on molecular genetics of immunity. She received the Japanese government’s Order of the Sacred Treasure, Gold Rays with Neck Ribbon.

Over his long career, Katz has hosted many Japanese scientists in his laboratory in the NCI Dermatology Branch and has trained some 32 Japanese investigators, many of whom now play leading roles in the field of dermatology. As a member of the board of directors and president of the Society for Investigative Dermatology, he urged cooperation between the society and the Japanese Society for Investigative Dermatology (JSID), chairing a joint U.S.-Japan academic research meeting between the two in 1986. Katz has also served on the editorial boards of numerous Japanese dermatology journals and given many lectures at Japanese universities. In addition, he is an honorary member of JSID, a designation rarely given to foreign scientists.

The Order of the Rising Sun, established in 1875, is Japan’s second-most prestigious award after the Order of the Chrysanthemum. Its design, featuring rays of sunshine, symbolizes both the powerful energy of the sun and the concept of Japan as the “Land of the Rising Sun.” The award has multiple classes and has been bestowed over the years to such figures as Gen. Douglas MacArthur, Sen. Daniel Inouye and actor/director Clint Eastwood.

NIH deputy director for intramural research Dr. Michael Gottesman, who attended the award ceremony, said, “I’m told that Dr. Katz’s award was great news among the Japanese dermatology community and was printed in their newsletters. We at the NIH are equally proud to have Dr. Katz in our ranks as an administrator, a remarkable scientist and a mentor to scientists around the world.”

The Order of the Sacred Treasure recognizes Ozato’s contributions to science and scientific interactions between Japan and the U.S., particularly at NIH. She has chaired the fellowship committee of the NIH-Japan Society for the Promotion of Science since the committee’s beginning in 1996. As a mentor, Ozato helped train 27 Japanese researchers, many of whom have become leaders in their fields after returning to Japan. After the 2011 earthquake in Japan, Ozato and several other NIH scientists organized a relief effort for biomedical researchers in the earthquake-stricken area.

Said Gottesman, “Dr. Ozato represents all that we admire about NIH scientists. Aside from her illustrious research career, she is a mentor, role model and true global citizen.” The Order of the Sacred Treasure is awarded to those who have made distinguished achievements in research, business industries, health care, social work and other fields.