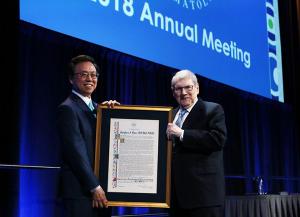 NIAMS Director Dr. Stephen Katz was recently awarded the Gold Medal by the American Academy of Dermatologists (AAD). The Gold Medal is the Academy’s highest tribute, and is presented on a “very selective basis to acknowledge outstanding and exceptional service in the field of dermatology.”

Katz has been director of the NIAMS since August 1995 and was also a senior investigator in the Dermatology Branch of the NCI from 1974 to 2014. He has focused his research on immunology and the skin. His work has demonstrated that skin is an important component of the immune system both in its normal function and as a target in immunologically-mediated disease. Katz and his colleagues have studied Langerhans cells and epidermally-derived cytokines, in addition to adding considerable new knowledge about inherited and acquired blistering skin diseases.

The award acknowledges Katz’s “lifetime commitment and contributions to dermatology, medicine, and science at a national and international level.” In the photo above, Katz (r) receives his award from Dr. Henry Lim, immediate past president of the AAD, at the Academy’s 2018 annual meeting.