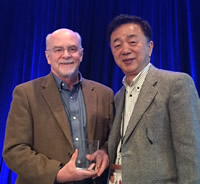 In the photo above, Dr. O’Shea (l) is shown receiving his award from ICIS President Dr. Tada Taniguchi.

NIAMS Scientific Director John J. O’Shea, M.D., has been awarded the 2016 Seymour and Vivian Milstein Award by the International Cytokine and Interferon Society (ICIS). The award, conferred at the 2016 ICIS annual meeting on October 16, 2016, recognizes achievements by biomedical researchers "who have made outstanding contributions to cytokine and interferon research, either in a basic or applied field."

Dr. O’Shea has been a physician and immunologist at NIH for 35 years, where he has made fundamental discoveries related to the signaling of cytokines, which are molecules that are critical for the development and functioning of the immune system. His research has focused on how cytokines communicate with T cells and innate lymphocytes to orchestrate immune responses.

Dr. O’Shea and his team cloned the JAK3 protein and identified its role in cytokine signaling and inflammation. This research contributed to the development of Jak inhibitors, a novel class of immunomodulatory drugs for the treatment of rheumatoid arthritis and other immune-mediated diseases.