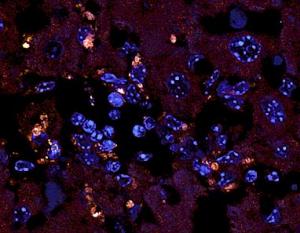 The human gut harbors a complex community of microbes that affect many aspects of our health. Known as the gut microbiota, these bacteria help with metabolism and maintaining a healthy immune system.

The lining of the intestine forms a barrier that is crucial to containing gut microbes. If the lining is breached and a gut microbe is able to get into the bloodstream and nearby organs, it can cause disease. Despite the fact that the body has many ways to prevent the breach, microbes sometimes get through.

The researchers first tested how mice predisposed to autoimmune disease were affected by antibiotic treatment. In untreated mice, they found bacteria in nearby lymph nodes and the liver at 16 weeks of age, and also in the spleen 2 weeks later. Mice treated with the antibiotics vancomycin or ampicillin had this deadly growth suppressed.

Analysis of cultures from nearby lymph nodes, liver, and spleen revealed the presence of a bacterium called Enterococcus gallinarum. When germ-free mice were colonized by E. gallinarum, the bacteria disrupted the gut barrier, moved into the lymph nodes and liver, and triggered an autoimmune response.

Taken together, these findings show that, in those who are prone, E. gallinarum can move through the gut barrier and into other organs to drive autoimmune responses. The results suggest new approaches to developing therapies for autoimmune diseases.

“The vaccine against E. gallinarum was a specific approach, as vaccinations against other bacteria we investigated did not prevent mortality and autoimmunity,” Kriegel says. “Treatment with an antibiotic and other approaches such as vaccination are promising ways to improve the lives of patients with autoimmune disease.”