NIAMS Staff Join in the Fight Against Ebola 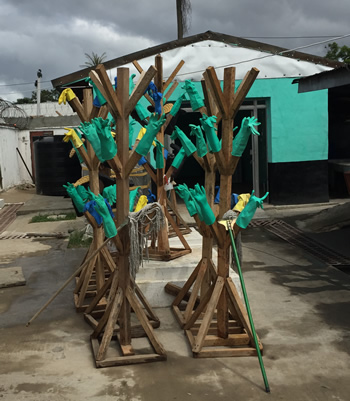 Personal protective equipment that has been used and washed, drying in the sun outside of Redemption Hospital in Monrovia, Liberia.
Credit Alice Fike, NP

The unprecedented Ebola epidemic in West Africa, which has claimed more than 11,000 lives, prompted many NIH physicians, nurses, pharmacists, and lab technicians to assist with the crisis both at home and abroad. Among them were NIAMS staffers Paul H. Plotz, MD; Cheryl Talar-Williams, MPH, PA-C; Alice Fike, NP; April Brundidge, BSN, RN; and Lorena Wilson, NP. Some, like Fike and Wilson, spent countless hours caring for the Ebola patients admitted to the NIH Clinical Center’s Special Clinical Studies Unit (SCSU) in Bethesda, Md. "Volunteering at the SCSU helped me gain an appreciation for those taking care of patients overseas, especially those working in high-risk areas with minimal resources and assistance," reflected Wilson.

Other volunteers traveled to West Africa in support of a clinical study being conducted as part of the Partnership for Research on Ebola Virus in Liberia (PREVAIL)—a collaboration between the U.S. Department of Health and Human Services and the Liberian Ministry of Health, with the National Institute of Allergy and Infectious Diseases designated as the U.S. lead. The PREVAIL study, which launched on February 2, 2015, and has enrolled 1,500 participants so far, is evaluating the safety and efficacy of two experimental vaccines aimed at preventing infection with the Ebola virus. More than 150 NIH employees and contractors have gone to West Africa to help with the study. "I volunteered to exchange what I’ve learned at the NIH as a research nurse with the medical staff in Liberia," said Brundidge, a research nurse specialist at the NIAMS. "I wanted to be a part of something that would make a difference in individuals’ lives and in generations to come."

Indeed, social responsibility and the ultimate goal of protecting and improving health were among the key reasons many NIH staff became involved with the PREVAIL study. “The opportunity to volunteer in West Africa in support of a major Ebola vaccine trial like PREVAIL was a rare and exciting opportunity,” said Talar-Williams, a physician assistant at the NIAMS. "The most important factor for me was the chance to contribute to a project with the potential for a significant public health impact." The NIH volunteers were sent to Redemption Hospital in Liberia’s capital city, Monrovia. Working in three-week rotations, they trained local healthcare workers on how to conduct the vaccine trials. The hospital also served as the main facility treating Ebola patients during the epidemic.

The volunteers faced many challenges, ranging from basic language barriers resulting from nuances in the English dialect spoken by Liberians, to a general mistrust of healthcare workers. During the peak of the outbreak, healthcare workers were often blamed for spreading the disease. "Adjusting to an environment reeling from the effects of the Ebola crisis was the toughest. In my past experience working in West Africa, I found West Africans to be very hospitable. Greetings and personal interactions were really important—always with a handshake and acknowledgement of each person you met. To be totally limited from handshaking or other physical contact was very different for me," said Fike, a NIAMS nurse practitioner, who had previously worked as a Peace Corps volunteer in Burkina Faso.

Despite the challenges, NIH staff can look back and reflect positively on the many lessons they learned from collaborating on the study. "I think this was a great example to the NIH community to generate a volunteer workforce to spearhead this project," Fike said. Although the Ebola epidemic is just about under control, more research is needed to control future outbreaks. "Many on our team would like to return and continue to assist in whatever way we can. The spirit and dedication of our Liberian colleagues were truly impressive and inspirational," Talar-Williams concluded.

The project remains active with extensions to Sierra Leone and Guinea. For more information, visit the PREVAIL questions and answers page.