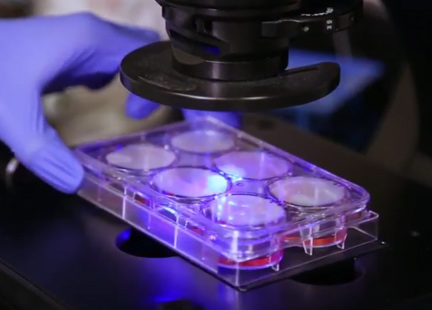 All of our cells, be they skin, muscle or bone, contain the same genetic material. Yet these cells appear different and have unique functions. Decades of research have revealed that the distinctions arise during development as a result of differential gene expression—different parts of the DNA are used, or "expressed," in each kind of cell. However, researchers are still working out the exact mechanisms by which each cell type chooses the genes to express. Now, new work — from investigators led by Markus Hafner, Ph.D., head of the RNA Molecular Biology Group in the intramural research program at the National Institute of Arthritis and Musculoskeletal and Skin Diseases (NIAMS) and Thomas Tuschl, Ph.D., professor at The Rockefeller University — has revealed clues about how this process occurs.

The investigators focused on a protein called DND1, which is essential for the viability of germ cells—sperm in males and oocytes in females. Earlier work showed that male mice lacking the protein became sterile, failing to develop more than 99.9% of their sperm cells. In addition, abnormal gene expression in the remaining immature sperm cells made the mice prone to testicular germ cell tumors.

In the current study, which appeared in Nature, the investigators sought to determine the molecular mechanisms by which DND1 functions. They showed that the protein binds to specific sequences within certain RNA molecules—intermediaries in the gene expression process—and recruits a cellular machine called CCR4-NOT. The CCR4 machine, in turn, destabilizes the RNAs, setting off their destruction. The clearance of these RNAs promotes survival of developing germ cells by blocking a normal pathway toward cell death.

This work has shown that disruption of an RNA degradation mechanism can lead to both infertility and the development of certain tumors. In addition, the study calls into question the long-held belief that control of gene expression lies largely in the process that produces RNAs. These new findings suggest that RNA destruction may be just as important in some cases.

Dr. Markus Hafner on the importance of RNA and RNA-binding proteins in gene expression and disease.