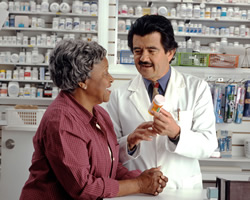 Photograph of a pharmacist with a prescription bottle in his hand talking to an elderly lady.

Taking methotrexate—a commonly prescribed anti-inflammatory medication—may reduce the risk of death among patients with rheumatoid arthritis (RA), according to recently-published research in the journal Arthritis and Rheumatism. The study, which was funded by the National Institute of Arthritis and Musculoskeletal and Skin Diseases (NIAMS), echoes earlier research that found that this standard treatment has protective effects among RA patients.

RA is a painful, chronic condition that involves persistent inflammation in the body, and is sometimes linked with other life-threatening diseases. Previous studies have suggested that treatment with methotrexate is associated with a lower risk of death among patients with RA. However, it is unclear if this reduced risk of death is attributable to the use of methotrexate itself, or if it is a reflection of other variables, such as overall health differences in the types of patients who are prescribed methotrexate. In addition, over the last 20 years, dosage levels have increased, as well as duration of use, prompting the need for updated information about the medication’s potential effects.

NIAMS intramural researchers, NIAMS-funded scientists at Stanford University, and colleagues at Western Pennsylvania Hospital examined the association between mortality and methotrexate use among 5,000 RA patients at 10 U.S. rheumatology practices. The data was collected between 1981 and 2005. After adjusting for a wide range of patient characteristics that might affect survival, such as coexisting conditions, methotrexate use was still associated with a significantly lower risk of death—up to a 70 percent reduction compared to those not taking the drug. The protective effect kicked in after taking methotrexate for more than one year, but it did not increase with longer duration of use. This finding suggests that the drug’s benefits are not cumulative over the long-term. Rather, it likely needs to be taken continuously to maintain its therapeutic value.

The significant relationship between the drug and improved survival rates also indicates that it may potentially have advantages beyond treating RA symptoms, such as reduced risk of cardiovascular problems, according to the researchers. However, the study did not specifically evaluate just how methotrexate works to decrease mortality rates. "Its full impact on overall health remains unclear and warrants further study," cautioned co-author Michael Ward M.D., who is the Acting Chief of the NIAMS Clinical Trials and Outcomes Branch.