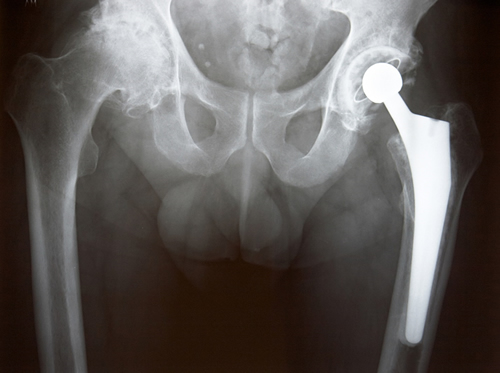 X-ray of a hip replacement.

A blood thinner commonly prescribed to prevent blood clots after a hip or knee replacement is associated with an increased risk of post-surgery bleeding or infection, according to a study conducted by orthopaedic researchers at the NIH’s National Institute of Arthritis and Musculoskeletal and Skin Diseases (NIAMS). The study was recently published in the journal PLOS One.

Blood thinning medications (anticoagulants) often are given to patients just before or after a total joint replacement to reduce the risk of blood clots following surgery. Two frequently used medications are warfarin (Coumadin) and low-molecular weight heparin (LMWH), also known as Lovenox. Warfarin is taken in the form of a pill, but the patient is required to undergo blood tests and monitoring while taking it, whereas LMWH, administered via an injection, requires no monitoring or blood tests, according to the study.

Previous, single-site studies have suggested that there may be an association between preventive anticoagulant use and post-surgery infections or other problems, but this is the first multi-site study addressing the issue.

"Anticoagulant use must be balanced with the need to avoid excessive post-operative bleeding, which can lead to complications and delay wound healing," said Timothy Bhattacharyya, M.D., study author and Head of the NIAMS Clinical and Investigative Orthopaedics Surgery Unit in the Intramural Research Program. "We wanted to see if either warfarin or LMWH was associated with a higher risk of post-operative problems," he said.

Bhattacharyya and colleagues in the NIAMS Clinical Trials and Outcomes Branch collaborated with researchers from the University of Massachusetts to examine data in the Global Orthopedic Registry (GLORY), an international database of surgeon-submitted patient information, including outcomes and which type of blood clot prevention the patient was prescribed. The researchers looked at a subset of records from 3,755 patients who had undergone a hip or knee replacement surgery in the United States.

Although the data are compelling and national in scope, it is important to note that the warfarin group differed from the LMWH group clinically and demographically, making it difficult to directly compare the two groups. For example, patients treated with LMWH tended to be older, whereas those taking warfarin tended to have more pre-existing conditions. However, when the investigators used statistical methods to adjust the data and compensate for the differences, those taking LMWH still fared worse than those taking warfarin.

"Assessing the need for anticoagulation to prevent clotting and the need to allow the surgical wound to heal are crucial steps," concluded first author Zhong Wang, Ph.D., also of NIAMS. "Clinicians should consider all factors when choosing which type of blood clot prevention strategy to prescribe for their patients."