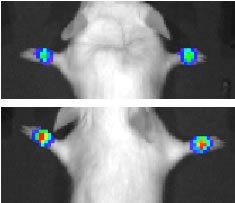 Treatment with a molecular decoy cuts down on inflammation in the joints of an arthritic mouse (upper panel), as indicated by the blue staining. The red and yellow staining represents high levels of inflammation in joints of a control arthritic mouse (lower panel).
Credit Nunzio Bottini, M.D., Ph.D., La Jolla Institute for Allergy and Immunology and the University of California, San Diego.

Research funded in part by the NIH’s National Institute of Arthritis and Musculoskeletal and Skin Diseases has identified an enzyme that modulates inflammation and joint damage in rheumatoid arthritis. The results, which appeared in the journal, Science Translational Medicine, suggest that targeting this enzyme could be an effective strategy for treating rheumatoid arthritis.

Rheumatoid arthritis is an autoimmune disorder in which the body’s immune system mistakenly attacks the joints. The resulting inflammation damages cartilage and bone, and can lead to chronic pain and disability. The disease is more common among women compared to men.

An errant immune system is thought to be the primary culprit in rheumatoid arthritis, but research has shown that cells called synoviocytes also contribute by invading joint cartilage and secreting damaging enzymes and inflammatory molecules. Scientists have not yet been able to determine why or how these cells leave the joint lining, where they provide lubrication, and invade the surrounding cartilage.

To gain a better understanding of this invasive process, researchers led by Nunzio Bottini, M.D., Ph.D., associate professor at the La Jolla Institute for Allergy and Immunology and at the University of California, San Diego, focused on enzymes called phosphatases, which are known to be plentiful in the synoviocytes of rheumatoid arthritis patients. In mouse studies, they found that one of these phosphatases, known as RPTP?, was increasingly produced in synoviocytes as arthritis progressed in the mice, suggesting that the enzyme might play a role in the disease.

Earlier work had shown that RPTP? is controlled through a switch-like mechanism involving molecules called glycans. One glycan, known as heparan sulfate, works to keep RPTP? inactive. Introducing another type of glycan that binds RPTP? and displaces heparan sulfate activates the enzyme.

After confirming that this same switch works in synoviocytes, Bottini’s team tested RPTP?’s effect on the cells’ movement. They found that activating RPTP? in mouse and human synoviocytes slowed the cells’ migration. They theorized that, if they could find a way to activate RPTP? in rheumatoid arthritis patients, they might be able to curb synoviocytes’ invasiveness and limit the damage they inflict on joints.

To test the idea, they treated synoviocytes taken from rheumatoid arthritis patients with a molecular "decoy," a fragment of the RPTP? protein that interacts with heparan sulfate. If the strategy worked, the decoy would release RPTP? from the glycan’s inhibitory grip, activating the enzyme.

The approach succeeded—the decoy-treated synoviocytes moved more slowly than controls, and they did not attach as well to cartilage. These results suggested that activating RPTP? could reduce the cells’ capacity to migrate and invade cartilage in patients.

The researchers next tested the decoy in a mouse model of the disease. They found that among mice injected with the decoy along with a substance that induces arthritis, the disease progressed more slowly and was less severe. The decoy also partly reversed signs of arthritis in mice that already had the disease.

Together, the findings suggest that targeting RPTP? could represent a novel way to treat rheumatoid arthritis.

"Because the medicines that we use to treat rheumatoid arthritis are directed at the immune system, only a few of them can be combined without risking an excessive reduction of immune defenses," said Dr. Bottini. "In addition, the currently available options don’t work for everyone. A drug that acts on a completely different target would be an extremely valuable tool in helping to control the disease."