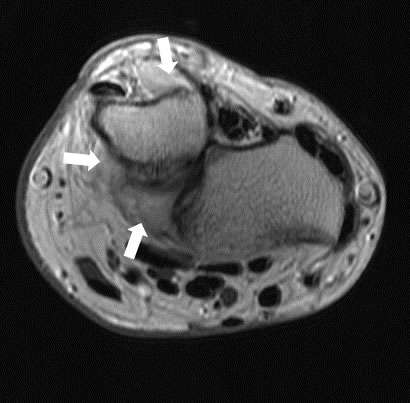 Joint inflammation caused by rheumatoid arthritis (RA) may continue even after a patient no longer has symptoms, according to a study funded in part by the NIH’s National Institute of Arthritis and Musculoskeletal and Skin Diseases (NIAMS). The study was published in the journal Arthritis Care and Research.

Determining whether and when a patient with RA is in remission currently depends on results from standardized clinical assessments and patient reports. Imaging biomarker approaches, such as magnetic resonance imaging (MRI) and musculoskeletal ultrasound, are sensitive measures of joint inflammation that can provide additional information, but determining whether to stop or continue with therapies after symptoms subside remains unclear.

"When patients start feeling better and meet clinical criteria for remission, it is tempting to stop therapy to reduce the risks and costs associated with the medications," said author and NIAMS grantee Veena Ranganath, M.D., M.S., of the University of California, Los Angeles. "But several reports have noted that many RA patients who stop taking medications after remission tend to relapse a year or so after discontinuing therapy, suggesting that disease activity may persist even in the absence of symptoms."

To better understand the course of the disease during a period of remission, Ranganath and colleagues followed a subset of patients who were enrolled in the Treatment of Early Aggressive Rheumatoid Arthritis (TEAR) trial for two years. In the TEAR trial, 755 adult patients were recently diagnosed with RA and had not yet been exposed to disease-modifying agents (DMARDS) like methotrexate—commonly used as a first-line treatment for RA. They were randomized to receive one of four treatment strategies:

The TEAR trial concluded that there were no clinical differences in response among the patients in each of the four groups. Starting with methotrexate alone, and adding sulfasalazine and hydroxychloroquine later if needed, is a reasonable therapeutic strategy in the early stages of RA, said the researchers.

During the trial, patients assigned to each treatment arm were regularly monitored for response and remission status using four different clinical assessment tools, as well as MRIs of the wrist to evaluate inflammation and erosion in the bones, tendons and lining of the joint.

Among the 118 patients with MRI data, patients who achieved remission had lower levels of inflammation as indicated in the MRI, compared to those who did not become symptom-free. However, all patients showed signs of lingering inflammation in their wrists, regardless of remission status or treatment strategy.

The study only examined MRI data of patients’ most affected wrist, thus limiting its scope, but it does suggest that more research is needed to better understand and possibly reevaluate the definition of clinical remission. "In the meantime, these results should prompt clinicians to reconsider withdrawing or temporarily stopping therapy for patients who appear to be in remission," said Dr. Ranganath.

This work was supported by NIAMS grant number K23AR057818 to Veena Ranganath. Additional support was provided by the NIH’s National Center for Advancing Translational Sciences (grant number UL1TR000124), the Agency for Healthcare Research and Quality, and the Rheumatology Research Foundation.