New Insights Into How Psoriasis Arises and How It Heals 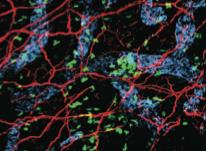 Psoriasis is a chronic skin condition characterized by itchy red patches and silvery scales, usually on the elbows, knees or scalp. It affects about 2 percent of Americans, and is sometimes associated with other health problems, such as arthritis, diabetes and heart disease. The causes are not fully understood, but the condition is related to an abnormal immune assault on skin cells that triggers inflammation.

Scientists have been trying to understand the molecular details of what causes psoriasis. Now, two studies funded in part by the NIH’s National Institute of Arthritis and Musculoskeletal and Skin Diseases (NIAMS) and published in Nature and the Journal of Clinical Investigation have uncovered some contributing factors. The findings shed light on how psoriasis arises and how the body works to repair the damage, offering potential new strategies for treating the condition.

Scientists are increasingly uncovering evidence of cross-talk between the nervous system and the immune system in many diseases, including psoriasis. Emotional stress can exacerbate psoriatic symptoms, while local anesthetics or nerve injury often reduce inflammation and induce remission.

Curious about the nervous system connection to psoriasis, scientists led by Ulrich von Andrian, M.D., Ph.D., of Harvard Medical School, focused their attention on a subset of pain-sensing neurons abundant in skin that confer the sensations of uncomfortable heat, cold and inflammatory pain. Working with a mouse model, they reasoned that if these neurons were involved in promoting psoriasis, removing them would ease symptoms of the condition.

They found that after removing these neurons, mice were less responsive to a compound called imiquimod, which normally triggers a psoriasis-like condition. The imiquimod-treated site was less swollen and inflamed than in control mice, and it contained less IL-23, a molecule known to mediate inflammation.

"From these results we knew that pain-sensing neurons, when exposed to imiquimod, trigger inflammation by stimulating the production of IL-23," said Jose Ordovas-Montanes, a NIAMS-supported graduate student at Harvard Medical School and co-first author of the study. "But we didn’t know where the IL-23 was coming from."

Further experiments identified the source of IL-23 to be immune cells called dermal dendritic cells (DDCs), and revealed that these cells are located in close proximity to pain-sensing neurons in mouse skin.

The researchers concluded that when mice are treated with imiquimod, pain-sensing nerve cells in their skin stimulate DDCs to make IL-23. IL-23, in turn, elicits an inflammatory cascade that ultimately produces the lesions that characterize psoriasis.

"By uncovering a role for the nervous system in psoriasis, we’ve discovered an entirely new pathway that we can explore for therapeutic purposes," said Dr. von Andrian. "By targeting these pain-sensing neurons, we may be able to develop new medicines for treating psoriasis and possibly other inflammatory skin diseases."

While many scientists study the molecular events that trigger psoriasis, Bogi Andersen, M.D., and his team at the University of California, Irvine, uncovered a mechanism that the body uses to repair the skin damage caused by the condition.

Andersen’s team focused on a protein called GRHL3, a gene activator known to be involved in skin development in the embryo and in repair of the outer barrier layer of skin in adults. Recent findings have also found the GRHL3 gene to be unusually active in skin af+F93fected by psoriasis, and other studies suggested that alterations in the gene’s activity could increase susceptibility to the condition.

To better understand GRHL3’s role in psoriasis, the researchers deleted the gene in mice, then tested their response to imiquimod. If GRHL3 played a part in repairing damaged skin, the GRHL3-deficient mice would be expected to show greater sensitivity to the psoriasis-inducing compound compared to mice who possess the gene.

The results bore this out—the mice lacking GRHL3 responded to lower levels of imiquimod than control mice, and they healed more slowly. Twelve days after imiquimod treatment, the skin of GRHL3-deficient mice continued to show signs of inflammation, while the skin of control mice had healed completely.

Further experiments showed that GRHL3 suppresses the production of certain inflammatory molecules, indicating that it works in part by tamping down the inflammation that causes the psoriatic lesions. The results suggest that enhancing the GRHL3-dependent pathway could be an effective strategy for treating psoriasis.

"Our findings are consistent with a model in which psoriasis activates the GRHL3 pathway, which helps to heal the lesions," said Dr. Andersen. "In the future, we may be able to develop ways to stimulate this repair mechanism, leading to less severe disease and quicker resolution of symptoms."