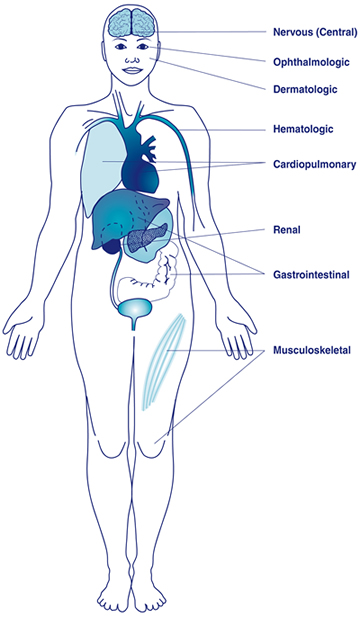 Lupus can affect multiple systems in the body. Diagnosing and treating the disease often requires a team of health care professionals.

A drug delivery system using nanoparticle technology that allows for better targeting of specific immune cells can potentially improve treatment approaches for systemic lupus erythematosus (SLE), according to research partially funded by the NIH’s National Institute of Arthritis and Musculoskeletal and Skin Diseases. The study was recently published in the Journal of Clinical Investigation.

SLE, or lupus, is an autoimmune disease in which the immune system attacks the body’s own tissues and organs. Lupus-related inflammation can damage the kidneys, skin, joints, brain, heart and lungs. The exact cause of lupus is unknown, but scientists know that certain immune cells, including T cells, B cells, and dendritic cells, are involved.

Current medications for lupus aim to suppress the errant immune responses in an effort to prevent disease progression. However, these medications, which usually must be taken daily and indefinitely to keep the disease under control, have significant limitations. They can be highly toxic and cause serious side effects. As a result, many patients end up discontinuing their medication.

In an effort to determine if lupus therapies could be made more effective and tolerable, researchers at Yale University designed and tested a drug delivery mechanism called a nanogel to administer mycophenolic acid (MPA), an immunosuppressant sometimes used to treat lupus. The nanogel in this study was biodegradable and composed of a gel-like core that was loaded with the medication and enclosed by a lipid membrane. Nanogel molecules are small enough to cross cell membranes and can be effectively programmed to seek specific cells. Although nanoparticle drug delivery systems have been used experimentally to treat cancer, they have not yet been explored as a potential treatment mechanism for lupus.

The researchers administered the MPA-loaded nanogel to lupus-prone mice that had not yet developed symptoms of the disease. Compared to lupus-prone mice who received MPA conventionally, the mice receiving the nanogel treatment lived an average of three months longer, and went longer without experiencing kidney damage—a complication associated with lupus. Mice that had already developed lupus symptoms, including kidney damage, lived an average of two months longer after receiving the MPA-loaded nanogel, compared to their counterparts who received MPA alone.

The investigators found that the nanogel particles accumulated in organs rich in dendritic and T cells, and successfully reduced inflammation associated with them. The nanogel also provided consistent levels of the drug throughout the body for longer periods of time compared with the conventional drug, allowing for lower doses. In addition, results suggested that the nanogel delivery mechanism works without depleting white blood cells, leaving patients less vulnerable to infection. Moreover, the researchers found no evidence of blood, liver or kidney toxicities associated with the nanogel.

"Conventional lupus treatments are less able to zero in on certain immune cells, and can compromise a patient’s ability to fight infections. The nanogel’s unique ability to target treatment to where it is most needed, and doing it without undesirable side effects, is a promising advance," concluded lead author Michael Look, Ph.D.

This research was also supported by the Lupus Research Institute and the Wallace H. Coulter Foundation.