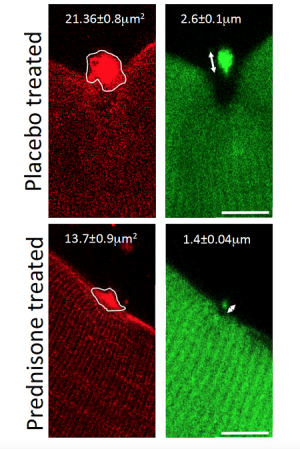 Research funded in part by the NIH’s National Institute of Arthritis and Musculoskeletal and Skin Diseases (NIAMS) has revealed insights into glucocorticoid steroid treatment for Duchenne muscular dystrophy (DMD). Scientists determined mechanisms of how glucocorticoid steroids improve muscle repair and function in mouse models of acute muscle injury and muscular dystrophy, according to a study in The Journal of Clinical Investigation. In a second paper in The Lancet, an international team found that in patients with DMD, long-term glucocorticoid steroid treatment delayed loss of muscle strength and function and decreased risk of death.

DMD is a genetic disorder resulting from a mutation in a gene that makes dystrophin, a protein involved in maintaining muscle cell membrane structure. People with the condition do not make the dystrophin protein in their muscles, hindering muscle function and repair. DMD primarily affects boys, occurring in about 1 in 3,500 male births worldwide.

Symptoms of DMD typically appear before age 6 and can include delays in milestones such as sitting and standing independently. Those with the condition experience progressive muscle weakness and loss of muscle mass in the lower half of their bodies, leading many to transition to wheelchairs by their teenage years. The heart and respiratory muscles are eventually affected, and bones may develop abnormally. These changes lead to cardiac and breathing complications. Few people with DMD live beyond their 30s.

With no cure for DMD, treatments aim to help control the symptoms and slow disease progress. Health care providers routinely prescribe glucocorticoid steroids (prednisone and deflazacort) to improve muscle strength and function. Experts think the steroids help decrease inflammation and may influence the repair of weakened muscle cell membranes. These steroids have many side effects, however, especially with long-term use. These include weight gain, weak bones, high blood pressure and behavior changes. Some side effects – muscle weakness and atrophy – paradoxically go against the intended benefits of the treatment.

How glucocorticoid steroids work in muscle

A team of researchers led by Elizabeth M. McNally, M.D., Ph.D., of Northwestern University, is working to better understand the underlying mechanisms of how glucocorticoid steroids work in muscle tissue. The scientists found that a single glucocorticoid steroid dose improved muscle cell membrane repair in normal mice with injured muscles. Steroid treatment increased gene expression of two proteins involved in membrane repair, annexins A1 and A6.

Health care providers typically prescribe daily glucocorticoid steroid treatment for DMD, although weekly treatment in children has been proposed to reduce behavioral side effects. Scientists compared daily vs. weekly steroid treatment in mouse models of acute muscle injury and muscular dystrophy. The team found that weekly treatment was just as effective as daily treatment in altering gene expression and improving muscle repair. However, daily dosing turned on cellular pathways that caused muscle to atrophy, counteracting some of the benefits. In contrast, weekly dosing enhanced muscle performance. The Northwestern University group published a separate paper in The American Journal of Pathology outlining similar benefits of weekly steroids in two different mouse models of another type of muscular dystrophy known as limb-girdle muscular dystrophy, suggesting that steroids could be beneficial for this form as well.

These results suggest that decreasing glucocorticoid steroid dose frequency may promote muscle membrane repair and muscle recovery and reduce detrimental side effects. “We showed steroid treatment, when given weekly, improves muscle performance,” Dr. McNally said. “We don’t have human data yet, but these findings strongly suggest some alternative ways of giving a very commonly used drug in a manner that doesn’t harm, but in fact helps muscle.”

Benefits of short-term vs. long-term glucocorticoid steroid therapy in males with DMD

While short-term glucocorticoid steroid treatment for DMD is beneficial, the effects of long-term treatment on muscle strength and function are not well understood. In a separate study published in The Lancet, an international team examined the benefits of long-term glucocorticoid steroid treatment on DMD progression in 440 males. Participants, ages 2-28 years, were enrolled at 20 centers across nine countries and followed for up to 10 years. The team divided participants into two groups – one group included males who didn’t receive steroid treatments or who received less than a month of cumulative treatments, while the other group included males who received treatments for one year or longer. Researchers looked at progression toward major mobility milestones, such as the time to go from lying on the back to a standing position and the ability to reach overhead.

The researchers found that long-term glucocorticoid steroid therapy delayed the loss of milestones that affected the lower limbs (such as standing or climbing four stairs) by a median of 2.1 to 4.4 years, compared with the other group. Long-term treatment delayed the loss of upper limb milestones (such as reaching overhead or using the hands to pick up objects) by a median of 2.8 to 8.0 years, compared with treatment for less than one month. Long-term use of glucocorticoid steroids was also associated with a decreased risk of death over the length of the study. The team noted that glucocorticoid steroid use, which included both daily and intermittent dosing, was associated with some side effects such as weight gain, behavior changes and growth delay.

"This long-term, follow-up study provides the most definitive evidence that the benefits of glucocorticoid steroid therapy in DMD extend over the entire lifespan. Most importantly, patients with Duchenne using glucocorticoids experienced an overall reduction in risk of death by more than 50 percent," said Craig McDonald, M.D., a professor at the University of California, Davis, and lead author of the study.

The research led by Dr.McNally and published in The Journal of Clinical Investigation and The American Journal of Pathology was supported by NIH’s NIAMS (Grant U54AR052646), NINDS (R01NS047726), NHLBI (R01HL61322), Parent Project Muscular Dystrophy and the American Heart Association.