Protein Linked to Dermatomyositis Found to Have Role in Regenerating Muscle 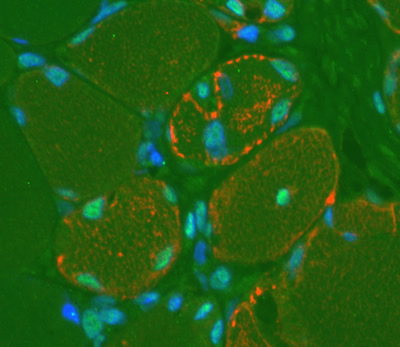 Many people with a rare muscle disease called dermatomyositis carry antibodies to a protein called T1F1γ, but the protein’s role in normal and diseased muscle has been elusive. Now, a study led by investigators at the NIH’s National Institute of Arthritis and Musculoskeletal and Skin Diseases (NIAMS) provides some insight by showing that T1F1γ has a role in muscle regeneration. The findings, which appeared in Arthritis and Rheumatology, suggest that an autoimmune attack on T1F1γ may contribute to the muscle inflammation that characterizes the disease.

Dermatomyositis is one of a family of acquired inflammatory muscle diseases. It typically comes on quickly, with a rash preceding or accompanying the onset of muscle weakness. Muscles close to the trunk, such as the hips, shoulders and upper arms, are usually affected first, but over time weakness can extend to the extremities. The disease strikes children as well as adults, and is more common in females. There is no cure for dermatomyositis, but medicines like corticosteroids help control the symptoms.

The exact cause of dermatomyositis is unknown, but it is believed to be an autoimmune disease, a type of disease in which the body mistakenly attacks its own tissues. In dermatomyositis, the immune system seems to target the muscle cells, which leads to inflammation and muscle degeneration.

"To understand dermatomyositis at a fundamental level, we need to identify and characterize the molecules that the immune system goes after," said Andrew L. Mammen, M.D., Ph.D., senior author of the study and head of the Muscle Disease Unit of the NIAMS Intramural Research Program. "These molecules will not only provide clues to the underlying causes of the disease, but they may also lead us toward new therapeutic approaches."

Scientists have already identified some of these molecular targets in people with dermatomyositis, and they include a protein called T1F1γ. T1F1γ is a gene regulator, and is known to be involved in the differentiation of certain cell types, such as blood cells, but its role in muscle was unknown.

To explore this question, Dr. Mammen’s team looked for the protein in muscle cell biopsies taken from dermatomyositis patients. The scientists found little T1F1γ in healthy, undamaged parts of the muscle, but when they looked at areas where tissue damage had triggered repair and regeneration, they saw high levels of the protein. They observed the same in experiments in mice, suggesting that T1F1γ is involved in regeneration of muscle tissue following muscle injury.

Using the model, the researchers found that levels of T1F1γ were high while myoblasts were multiplying, but tapered off as the cells ceased dividing and began to join together. This suggested that the decline of T1F1γ might signal the shift from myoblast proliferation to cell fusion and the formation of mature muscle tissue.

To further assess T1F1γ’s effect on the timing of muscle differentiation, the researchers blocked the protein’s production in laboratory-grown mouse myoblasts. They found that differentiation sped up—the cells produced markers of mature muscle tissue about 12 hours sooner than controls, and they began to fuse 12-24 hours earlier.

Taken together, the results indicate that T1F1γ plays a role in muscle cell regeneration—possibly by driving the growth of myoblasts or signaling the shift toward differentiation. The work also points to a potential role for T1F1γ in dermatomyositis, and may offer a new treatment strategy.

"Our findings support the idea that high levels of T1F1γ in regenerating muscle in people with dermatomyositis help drive the damaging inflammatory response," said Dr. Mammen. "It’s possible that if we could find a way to rein in this response, we could reduce inflammation and improve the outlook for people with the disease."