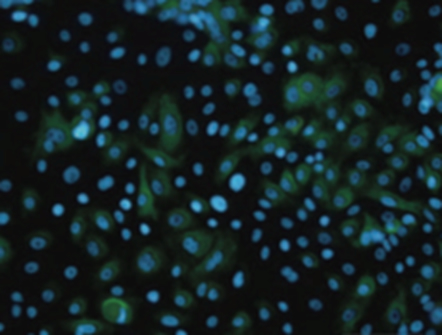 Unlike most of a junctional EB patient’s skin, some cells have repaired the EB-causing mutation in the collagen XVII gene and produce the functional protein (green).
Credit Courtesy of Angela M. Christiano, Columbia University.

Two new studies funded in part by NIH’s National Institute of Arthritis and Musculoskeletal and Skin Diseases (NIAMS) describe efforts to develop stem cell-based approaches for treating Epidermolysis Bullosa (EB), a rare, genetic skin disease. The findings, which were published jointly in the journal, Science Translational Medicine, may lead to individualized therapies for EB, and possibly other genetic diseases.

People with EB have skin that is so fragile that the slightest friction causes blisters. The severity of the disease ranges from limited tearing of skin on the hands and feet to widespread blistering and scarring, including mucosal surfaces like the inside of the mouth and the airways. In some severe cases, complications such as infection or damage to internal organs can lead to premature death.

EB is caused by mutations in genes for certain structural skin proteins. If scientists could correct the mutations in cells taken from a patient, they might be able to grow the cells into a healthy skin graft and use it to treat that individual’s wounds without risking immune rejection.

"There is currently no cure for EB, so treatment is aimed at protecting the skin, caring for the wounds and managing the pain," said Angela M. Christiano, Ph.D., of Columbia University, and senior author of one of the studies. "Our approach holds great therapeutic potential because it focuses on the source of the disease—the mutated gene—rather than its symptoms."

But repairing disease-causing mutations can be tricky. Scientists can alter gene sequences in cells using genetic engineering methods, but the process is inefficient and may introduce potentially harmful mutations.

To get around this difficulty, Dr. Christiano’s team took advantage of a natural phenomenon that occurs in some genetic diseases, including some forms of EB. Occasionally, cells correct the genetic abnormality themselves, producing healthy cells. In people with EB, this results in patches of skin that are affected by the disease interspersed with patches of healthy skin.

The researchers began by isolating cells from healthy skin from an EB patient with a severe form of the disease called junctional EB. The genetic defect for this form of EB lies in collagen XVII, a structural skin protein that helps anchor the epidermis, which is the upper layer of skin.

The next challenge was to generate enough cells for a skin graft. Differentiated cells like skin cells have limited capacity to multiply, so the researchers used a genetic method discovered nearly a decade ago to reprogram the patient’s skin cells to the embryonic state. Cells produced in this way, called induced pluripotent stem cells (iPSCs), can grow and divide indefinitely.

Once the researchers had grown a large enough quantity of iPSCs, they steered them back toward becoming skin cells by treating them with certain growth and differentiation factors, mimicking a process that occurs in normal development.

The approach was successful. The resulting skin cells formed structurally normal skin that was maintained when grafted onto mice.

In the second study, Anthony E. Oro, M.D., Ph.D., and Marius Wernig, M.D., Ph.D., of Stanford University, used a similar approach using skin derived from patients with a form of the disease called recessive dystrophic EB (RDEB). RDEB is generally severe, and stems from a defect in the gene for collagen VII.

But in RDEB patients, natural repair of disease-causing mutations is rare, so the researchers did not have a source of self-corrected cells to draw upon.

To fix the faulty collagen VII gene, the scientists used a method that involves introducing the normal gene into cells using an engineered virus. Once inside, the DNA repair machinery uses the normal, virus-borne gene to mend the mutated copy in the chromosome.

One of the dangers of this technique is that it can inadvertently produce unwanted mutations, such as those that increase the risk of cancer. But the researchers found that these types of mutations occurred infrequently using their method. In addition, they demonstrated that, among the cells generated using the method, they could use genetic screening to select for healthy cells with little potential to become cancerous.

As in Dr. Christiano’s study, the approach yielded healthy skin that the scientists successfully grafted onto mice. In a third paper published in the same issue of Science Translational Medicine, German and Austrian investigators reported similar results using a mouse model of RDEB.

"Our work provides a proof-of-principle for the use of gene editing along with stem cell technology to treat a devastating inherited disease," said Dr. Oro. "This represents an important step toward developing personalized therapies using an approach we call therapeutic reprogramming, which could help patients with EB and possibly other genetic diseases as well."